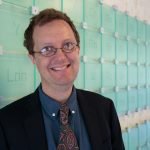 George Musser
George Musser is a contributing editor at Scientific American and Nautilus magazines and the author of two books, Spooky Action at a Distance and The Complete Idiot's Guide to String Theory. He is the recipient of the 2011 American Institute of Physics Science Writing Award and the 2010 American Astronomical Society’s Jonathan Eberhart Planetary Sciences Journalism Award. He was a Knight Science Journalism Fellow at MIT from 2014 to 2015.
https://www.georgemusser.com @gmusser Facebook
Are Black Holes Really Paradoxical? An Interview with David Wallace

Today in Quanta magazine, I have an article on recent efforts to de-paradoxize black holes. Before you dive into the details, you might wonder about the framing. How paradoxical are black holes, really? Physicists and science writers throw around the word “paradox,” but do these cosmic sinkholes pose any out-and-out contradiction? I put the question […]

Spooky influences might leap not just across space, but across time, too.

The mysteries of quantum mechanics are usually portrayed as mysteries of space: how strange that the fates of particles on opposite sides of the universe could be joined. But they are also mysteries of time. A particle you create today could be connected in some unaccountable way to one that does not exist yet. Einstein […]

Entanglement is not the only type of nonlocality in quantum theory.

The atoms of space may be tiny, but could have huge effects.

If spacetime is made of atoms, as many theoretical physicists these days speculate, could we ever know? You might doubt it. Conventional wisdom says those atoms would be too small, too energetic, or just plain too weird. But Daniele Oriti thinks we have a shot. Oriti, an Italian theorist working at the Max Planck Institute […]

By George Musser 0 Comments 1 min read Continue reading
Why is Quantum Physics So Freakin’ Hard to Write About? [Video]

Every area of journalism presents its challenges, but quantum physics is in a molecular orbital of its own. It demands more time per word than anything else I’ve written about. Why is that? Earlier this month I offered some thoughts to fellow science journalists attending a philosophy-of-physics workshop at the University of Leeds. Although my […]

As strange as quantum entanglement is, the world would have been even stranger without it.

It’s quite a trick to picture a theory even weirder than quantum mechanics. Yet many physicists think the best way to make sense of quantum mechanics is to imagine what might have been. Within a vast radiation of conceivable theories, they look for principles that single out the quantum. In so doing, they aim to […]

To test the interpretation of quantum mechanics, look to cosmology.

Quantum physicists do love their beer. By day they build instruments, measure numbers, solve equations. By night they retire to the bar or pub and muse about the philosophical puzzles of quantum theory. By “philosophical” they mean “fun but impractical.” Maybe quantum theory betrays the existence of parallel universes, maybe it exposes causal influences coming […]

When physicists get stuck, call in the philosophers.

The nice thing about philosophers of physics is that they have no dog in the fight among string theory, loop quantum gravity, and other competing approaches to a fundamental theory of nature. They can stand back and offer some third-party perspective. One who specializes in this is Karen Crowther, a postdoc in the University of […]

Thumb your noise at government surveillance with a highly simplified form of quantum cryptography.

“Are you telling me that this could be of practical use?” exclaimed the Irish physicist John Bell. He had shown in the 1960s that quantum entanglement burrowed deep into the foundations of physics, but even he hadn’t thought it could have real-world applications. That was the brainstorm of Artur Ekert, then a graduate student at […]

In November 2003 I published a short news story in Scientific American about the orbital angular momentum of light and how you can glimpse it with a laser pointer and an overhead transparency. The article is no longer available at scientificamerican.com, so, as a service to fellow makers and citizen scientists, here are the instructions: […]

A slightly more technical version of my book talk

Here’s a talk I gave at the Centre for Quantum Technologies in Singapore on March 24, 2016. Note that it was the first time I’d given this particular talk and it had a couple of first-iteration glitches.

A proposed empirical scale of consciousness from dead to superhuman.

I have an essay in Aeon magazine on the possibility that machines might become conscious without our realizing it and possible ways to test for that. A huge variety of physiological and behavioral tests of consciousness might be adapted to machines, and Spanish AI researcher Raúl Arrabales Moreno and his colleagues have systematized them as […]

Shine a laser on a nonlinear optical crystal to get streams of entangled photons.

The number-one question that people ask me when I talk about nonlocality is: how are entangled particles created? I didn’t say much about this in the first edition of my book because the details don’t matter for my overall argument, but since everyone wants to know, I figure I should elaborate. (I’ve also added an […]

My book talk at Google

The debate over quantum nonlocality awaits its resolution in a unified theory of physics.

If anyone is the Kissinger of quantum physics—in a good way, striving to forge peace in the century-old dispute over the meaning of the quantum—it is Howard Wiseman. A theoretical physicist at Griffith University in Brisbane, Australia, Wiseman thinks the debate hasn’t been resolved because it can’t be, given our present state of knowledge. Only […]

“Atoms” of space are too small to see, but betray themselves indirectly.

I’m fascinated by how the humblest observations can lead you to the profoundest conclusions, and here’s one I learned from Thanu Padmanabhan, an eminent theoretical physicist at the Inter-University Centre for Astronomy and Astrophysics in Pune, India. Suppose you cup your hands around a glass of cold water to warm it up. From this simple […]

Step one to understand the mysteries of black holes: build a big bathtub.

Don’t be alarmed, but there is a black hole in your bathtub. When you drain the tub, water converges on the plughole and speeds up, eventually flowing too fast for surface waves to propagate outwards. Those waves get swept down the drain like hapless astronauts falling into a black hole (see video at end of […]

The eminent Israeli physicist explains the peculiar type of action at a distance that bears his name.

In 1959 physicists Yakir Aharonov and David Bohm startled their colleagues by predicting a new type of quantum nonlocality, distinct from the phenomenon that had spooked Einstein. They showed that an electric or magnetic field can have an effect on a particle at a distance: even when the field exerts no force on that particle, […]

The great mystery of quantum mechanics is that particles can be connected without a connector. They can coordinate their behavior in ways that are too complicated to be preprogrammed into them, even though no process is acting across the distance between them. “We can’t say that one thing led to another,” Nicolas Gisin of the […]

A simple model of the phase transition that begat space.

Could space as we know it be just one possible phase of the universe, able to undergo a transition to or from an entirely alien structure? This video animation shows how that might happen, according to a model known as quantum graphity, developed by theoretical physicists Tomasz Konopka, Fotini Markopoulou, Lee Smolin, and others. (The […]

Einstein's underappreciated argument for the strangeness of quantum physics.

“This onslaught came down on us as a bolt from the blue,” recalled Léon Rosenfeld, a young colleague of the physicist Niels Bohr. They were shocked, shocked, by Einstein’s famous 1935 critique of their interpretation of quantum mechanics. But why the surprise? Einstein’s argument did not originate in 1935 or even with his storied confrontation […]

By thinking of nature as a hierarchy, scientists dissolve the dichotomies they have wrestled with.

The holographic principle, as explained by the man who has done more than anyone else to understand it.

The holographic principle is arguably the most tangible and tantalizing clue to a quantum theory of gravity, but for years physicists didn’t know what to make of it. That changed in 1997 when Juan Maldacena, now at the Institute for Advanced Study, came up with the first concrete example of what the principle means and […]

A leading theorist explains quantum entanglement and what it might mean for the structure of spacetime.

Some of the most interesting conversations I’ve had in my life have been with Ted Jacobson, a theoretical physicist at the University of Maryland. A musician, an amateur baker, and co-creator of loop quantum gravity, he is deeply self-reflective—a man who always questions his own thinking, who used to criticize string theory but then came […]

Spacetime seems to have a granular structure, but what the heck are the grains?

Joe Polchinski, based at the Kavli Institute for Theoretical Physics in Santa Barbara, is one of the world’s leading string theorists and an avid cyclist. (Many colleagues have challenged him to a race, to their later chagrin.) He is best known for showing that string theory isn’t just about strings—it predicts a huge diversity of […]

One of the scientists I follow in my book is Steve Giddings, a theoretical physicist at U.C. Santa Barbara who is also a highly skilled mountain-climber. In this video, he explains how quantum mechanics, when applied to black holes, calls the principle of locality into question and suggests that spacetime is not a fundamental ingredient […]

My favorite optical illusions are motion illusions: static images that appear to spin, shimmer, and shimmy, like Piet Mondrian’s Broadway Boogie–Woogie or the psychedelic pinwheels of Japanese psychologist Akiyoshi Kitaoka. So I was pretty pleased to come across a new class of them, known as fuyuu, or floating, illusions. I visited their co-creator, mathematician Hitoshi Arai, […]

The holographic principle—with a real hologram

I remember buying my first hologram as a college student in the mid-1980s. It showed a bed of nails. I came across it at a gallery in what was then the world’s capital of spacey trinkets, Haight Street in San Francisco. When I picked it up, the hologram looked like a featureless sheet of film, […]

By George Musser 0 Comments 5 min read Continue reading
Why Bother with Ordinary Fireworks When You Can Have Black Hole Fireworks?

Theoretical physicist Carlo Rovelli, one of the creators of loop quantum gravity, and his collaborator Hal Haggard have just come out with a new paper on black holes. Ever attuned to puns, Rovelli calls it the “fireworks” model, alluding to the firewall argument that has consumed black-hole theorists over the past two years. As if […]

Now that the world’s premier particle smasher has reached its maximum energy, physicists are planning new machines to follow up its discoveries.

In 1954 the renowned physicist Enrico Fermi did a simple but depressing calculation about future particle accelerators. To create particles with an energy of 3 teraelectron-volts, he estimated, you’d have to build a ring 8,000 kilometers in radius at a cost of $170 billion. It was a rare instance of Fermi being wrong. The Large […]